The science and science behind digital energy

The Science behind the image as an energy transmitter

The world is made up of light particles which when condensed turn into a physical form, science has proved this.

Science has taught us and for many years we believed that matter is made up of just atoms. Atoms were thought to be the fundamentally indivisible particles and building blocks of everything. But then in 1897 J.J Thompson discovered electrons in a cathode ray experiment. After that, many atom models were proposed and new particles such as protons and electrons were discovered. But later it was discovered that even protons and neutrons can be divided to even smaller particles known as quarks. Each time when a new particle was discovered, it led us to more questions. We always believed that there always was something incredible yet to be discovered.

The Higgs Boson which is popularly known as the “God’s particle”, is an elementary particle which is associated with the Higgs field, a quantum field which is responsible for masses of particles. Existence of this field will explain a basic question that “why particles have mass”

Well, Higgs boson was found on 14th March, 2013, in the Large Hadron Collider, which is at the European Organization for Nuclear Research (CERN), Geneva.

Based on the above theory, this is what happens.

What are the most fundamental building blocks of all matter ? They are the pieces of matter that make up everything from flowers to people to galaxies and cannot be broken down into anything smaller?

In a real atom, the protons and neutrons are far larger than quarks and electrons, and there would be much more empty space. In fact, if this atom were the size of a large city, each proton and neutron would be the size of a person, and each quark and electron would be smaller than a tiny freckle.
Scientists once thought the most fundamental building block of matter was a particle called the atom. Now we know that the atom is made of many smaller pieces, known as subatomic particles. Every atom contains a central core called the nucleus, made of particles called protons and neutrons. The nucleus is surrounded by mostly empty space, except for very tiny particles called electrons that orbit the nucleus. Recently, scientists have discovered that protons and neutrons are made of smaller particles known as quarks. Today, physicists don’t know of anything smaller than quarks and electrons, but they don’t know for sure whether these are the simplest building blocks of matter.

Based on this we can now see how another Nobel prize winner Raman create now widely use raman spectroscopy. If you can understand this…you know where Sri Pranaji ability comes from.

The Raman effect was first experimentally discovered and described by the physicist Chandrasekhara Venkata Raman (* 1888, † 1970) in 1928. The Raman effect is based on inelastic light scattering at the chemical bonds of a sample. Due to vibrations in the chemical bonds this interaction causes a specific energy shift in parts of the back scattered light which results in a unique Raman spectrum. 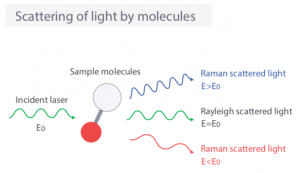 This in spiritual world we say Aura and each aura have is own signature and we can copy and reproduce in what ever form. This what Sri Pranaji Call ” Digital energy”.

Based on what science know so far and what siddhar been saying, you can find the connection there which will make you understand what is spiritual power and how certain thing consider “ impossible” become possible. Everything is possible for human once he know who he/she was, when they realise the power within and thier own potential.

The Spiritual scientists we know are known as the Siddhars.

The Siddhars as we know them are known as the Spiritual scientists.
The siddhar have said, that god is in the form of light, he/ she does not have a name and form and is just a source of energy.
This source of energy in its own quest to know it’s true potential from the one source, split into two as in a single form it cannot understand its own nature, this is explained in a simple form as Paraatma and Jeevaatama ( Brahman and Maya .. in Vedic scriptures)

The whole creation fundamentally is just a learning process, all human beings have to go through an evolution process to understand it own nature.
The siddhas do not believe there is a god with a certain name who created this whole creation for the purpose of his own fun.. that’s what came from religion !
“You are not a sinner, you are a learner”… Sri Pranaji.

A simple challenge is to reason for yourself, why would (the so called) God waste his time in creating some game, let you go through certain tests and then decide, let’s punish or reward them if they follow him or not. Why?

This light, the Jothi is from the paraatma which in its true essence is the “Energy that is created and stays in the things created.” The jothi has various vibrations and spectrums according to the nature of matter.

Sri Pranaji through the knowledge of this jothi designed a method that can capture and transmit almost anything in any form energetically, through a digital form.
This may sound impossible, as even some of the famous Gurus of this time do not understand this technology.

But for Sri Pranaji, he believes that, to believe you need to experience.

So to help you understand the concept by feeling, experiencing and believing, look at the image below which Sri Pranaji has activated with energy that will make your mind go into a calm, peaceful and passive mode.
Experience it for yourself.

Look at image for 30 second and close eye.

Just to give a thought

So basically, based on what science knows so far and what the siddhar’s have been saying, you can find the connection, which will make you understand what is spiritual power and how certain things that are considered “impossible” through science become possible with spiritual power.

For humans, everything is possible once they know who he/she is, when they find the power within and realise their own potential.

Just for your thought…
The biologists say the tiny virus has an intelligence of its own.
When the virus so small, can have the ability to change its DNA and RNA, is able to transform itself to fight and survive all human medicine and still continue to evolvle.

Now just think… If a virus so small has this intelligence, we humans who are much bigger should have a higher intelligence and capability to fight it right?

But again, what does science tell you?
NO.. your immune system is not so intelligent and you need external medicine to support it.
When we can self heal, why have we become dependent on outer resources?

Over the years, they (science) with all kinds of medicine, have successfully weakened your immune system and made it incapable?

Think about it and make your own conclusion.

For those of you who are interested, Pranashakty offers a course on the practice and art of energy manipulation, known as the Shakty Enlightment Programme (SEP).

SEP students will be gradually inducted to an ancient science of connecting to the energetic realm.

SEP Students will be ultimately equipped with the ability to experience for themselves every form of energetic practice known to man.

As the SEP is empirical in nature ie not theoretical, the only scientific apparatus deployed throughout the 5year SEP is the senses inherent in the living human. SEP Students will be trained under the guidance of Sri Pranaji to sense, to visually perceive, to conjure and to manipulate energies of various forms.

Upon successful completion, candidates will therefore be endowed with the most portable energy test kit for life – themselves! SEP graduates will thus be able to verify for themselves the quality of energy. This is important to expose the nonsense of purported spiritual gurus. Successful candidates are also taught to conjure energy to heal all dis-eases and manifest their deepest desires.

For further information and testimonials, you are invited to click on the link here [ … ]